Attempts to integrate economics and ecology have been based on one of three strategies: (1) economic imperialism; (2) ecological reductionism; (3) steady-state subsystem. Each strategy begins with the picture of the economy as a subsystem of the finite ecosystem. Thus all three recognize limits to growth. The differences concern the way they each treat the boundary between the economy and the rest of the ecosystem, and that has large policy consequences for how we accommodate to limits. 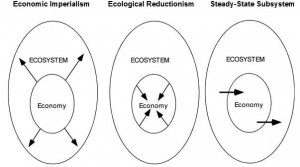 Economic imperialism seeks to expand the boundary of the economic subsystem until it encompasses the entire ecosphere. The goal is one system, the macro-economy as the whole. This is to be accomplished by complete internalization of all external costs and benefits into prices. Those myriad aspects of the biosphere not customarily traded in markets are treated as if they were by imputation of “shadow prices”–the economist’s best estimate of what the price of the function or thing would be if it were traded in a competitive market. Everything in the ecosphere is theoretically rendered comparable in terms of its priced ability to help or hinder individuals in satisfying their wants. Implicitly, the end pursued is ever-greater levels of consumption, and the way to effectively achieve this end is growth in marketed goods and services.

Economic imperialism is basically the neoclassical approach. Subjective individual preferences, however whimsical, uninstructed, or ill-considered, are taken as the ultimate source of value. Since subjective wants are thought to be infinite in the aggregate, as well as sovereign, there is a tendency for the scale of activities devoted to satisfying them to expand. The expansion is considered legitimate as long as “all costs are internalized.”

But many of the costs of growth we have experienced have come as surprises. We cannot internalize them if we cannot first imagine and foresee them. Furthermore, even after some external costs have become visible to all (e.g., climate change), internalization has been very slow and partial. Profit maximizing firms have an incentive to externalize costs. As long as the evolutionary fitness of the environment to support life is not perceived by economists as a value, it is likely to be destroyed in the imperialistic quest to make every molecule in creation pay its way according to the pecuniary rules of present value maximization.

Ironically, this imperialism sacrifices the main virtue of free market economists, namely their antipathy to the arrogance of central planners. Putting a price tag on everything in the ecosphere requires information and calculating abilities vastly beyond any imagined capacity.

There is no doubt that once the scale of the economy has grown to the point that formerly free environmental goods and services become scarce, it is better that they should have a positive price reflecting their scarcity than to continue to be priced at zero. But there remains the prior question: Are we better off at the new larger scale with formerly free goods correctly priced, or at the old smaller scale with free goods also correctly priced (at zero)? In both cases, the prices are right. This is the suppressed question of optimal scale, not answered, indeed not even asked, by neoclassical economics.

Ecological reductionism begins with the true insight that humans and markets are not exempt from the laws of nature. It then proceeds to the false inference that human action is totally explainable by, reducible to, the laws of nature. It seeks to explain whatever happens within the economic subsystem by exactly the same natural laws that it applies to the rest of the ecosystem. It subsumes the economic subsystem indifferently into the natural system, erasing its boundary. Taken to the extreme, in this view all is explained by a materialist deterministic system that has no room for purpose or will. This is a sensible vision from which to study the ecology of a coral reef. But if one adopts it for studying the human economy, one is stuck from the beginning with the important policy implication that policy makes no difference.

The reductionist vision frequently appeals to the Maximum Entropy Production Principle (often capitalized to elevate it to the same level as the Second Law of Thermodynamics). It says that whatever competing system maximizes entropy production will be competitively selected. Indeed one can appreciate the logic of this principle. The system that can monopolize and most rapidly degrade available sources of low entropy will displace competing systems by depriving them of their energy source. This insight should be taken seriously as a natural tendency. But when we apply it to the human economy it gives us an absurd policy implication. Namely, that the economy maximizes entropy production. Since maximizing entropy is the same as maximizing waste, that hardly offers a sensible rule for either understanding or directing the human economy!

The maximum entropy principle is more like the tragedy of open access commons than like the Second Law of Thermodynamics. That is, it is a trap–a competitive race to the bottom in the absence of collective action. The Second Law by contrast is an inevitability that we must recognize and adapt to; it has no known exceptions. The maximum entropy production principle is not a physical law. No action, collective or individual, can avoid the Second Law. Like the tragedy of the commons, the tragedy of entropy maximization is a detrimental competitive tendency that we must overcome by collective action. But if we mistakenly consider it a physical law on the level of the Second Law of Thermodynamics, then there is nothing to do but give up.

Economic imperialism and ecological reductionism have in common that they are monistic visions, albeit rather opposite monisms. It is the monistic quest for a single substance or principle by which to explain everything that leads to excessive reductionism on both sides. Certainly one should strive for the most reduced or parsimonious explanation possible without ignoring the facts. But respect for the basic empirical facts of natural laws on the one hand, and self-conscious purpose and will on the other hand, should lead us to a kind of practical dualism. After all, that our world should consist of two fundamental elements offers no greater inherent improbability than that it should rest on one only. How these two fundamental elements of our world (material cause and final cause) interact is a venerable mystery–precisely the mystery that the monists of both kinds are seeking to avoid. But economists are too much in the middle of things to adopt either extreme. Economists are better off denying the tidy-mindedness of either monism than denying the facts that point to an untidy dualism.

The remaining strategy is the steady-state subsystem. It does not attempt to eliminate the subsystem boundary, either by expanding it to coincide with the whole system or by reducing it to nothing. Rather, it affirms both the interdependence and the qualitative difference between the human economy and the natural ecosystem. The boundary must be recognized and drawn in the right place. The scale of the human subsystem defined by the boundary has an optimum, and the throughput by which the ecosphere physically maintains and replenishes the economic subsystem must be ecologically sustainable. That throughput is indeed entropic, but rather than maximizing entropy the goal of the economy is to minimize low entropy use needed for a sufficient standard of living–by sifting low entropy slowly and carefully through efficient technologies aimed at important purposes. The economy should not be viewed as an idiot machine dedicated to maximizing waste. Its final cause is not the maximization of waste but the maintenance and enjoyment of life.

The idea of a steady-state economy comes from classical economics, and was most developed by John Stuart Mill (1857), who referred to it as the “stationary state.” The main idea was that population and the capital stock were not growing, even though the art of living continued to improve. The constancy of these two physical stocks defined the scale of the economic subsystem. Birth rates would be equal to death rates and production rates equal to depreciation rates. Today we add that both rates should be equal at low levels rather than high levels because we value longevity of people and durability of artifacts, and wish to minimize throughput, subject to maintenance of sufficient stocks for a good life.

Ecological economics should seek to develop the steady-state vision, and get beyond the dead ends of both economic imperialism and ecological reductionism.

This article was first published on The Daly News.