I write this sitting in a service station on the M11 in the UK travelling back from Leipzig after what was an inspiring conference on degrowth. I’ve been hitching for only a couple of years now, but as soon as my talk on money and happiness was accepted for the conference in Leipzig, it was inevitable that I would hitchhike there – hitching seemed to me the only authentic way I could personally make a journey to a conference on degrowth.

Before I hitch I can’t help but feel a lot of tension within myself – what will happen on this ride? Will I get to my destination, how long it will take, will I be stranded in the middle of nowhere, and who will I meet along the way? At the back of my mind I know that it would always be easier to just take the train. Life is full of enough uncertainties but on the road uncertainty seems amplified and there is only one real way to deal with uncertainty wherever you are– let go and just accept the moment as it is. Expect to go nowhere and you may find yourself able to go anywhere.

Connecting to people and sharing stories

The ride that took me to the busy service station in which I sit now came 2 hours after I got off a boat in Harwich. I struggle to get rides off of boats and after standing at the side of the road for too long in a bad spot I finally got my ride from a guy putting air into the tyres of his delivery van at a local gas station. As we travelled together I listened to his story – a fascinating story about growing up in Walthamstow– having it all, then losing it all, being sad, being happy, up until where he was currently – living simply with his girlfriend and new child. And I shared my own story too – that I was on a business trip and that I hitchhike for fun – and I told him this whilst I enjoyed the “pain au chocolat” and coffee that he had bought me – things I wouldn’t normally consume!

From a life fully experienced he’d come to the same conclusions as most of my research on money and happiness – that having money, chasing it, can really get in the way of some really important things in life – our social relationships, our physical and mental health, and how we relate to the world around us. You hear all sorts of stories from “strangers” on the road – people from sometimes very different backgrounds but similar in their openness and generosity to help someone they hardly know. I hear their story, I tell my own, and I find myself connecting to a life I wouldn’t come across if I stayed in my academic world and didn’t get out there and sit in the cars of strangers– it humbles me. 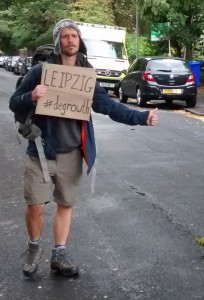 But looking back my journey to Lepizig started in Manchester. With all these experiences it seems much longer ago now but I still remember it well. I begun like a rocket by picking up four successive rides, each within two minutes of thumbing it – what luck – any anxieties disperse when you’re actually there doing it – I was flying free and got down to Cambridge in no time at all. But then some longer waits came; when hitching you’ve got to find a good spot where people can see you and stop, and if you’re not careful frustrations can easily creep in.

It always helps if you can find a way to talk to drivers, for example at gas stations, it’s easier for people to trust if they can talk to you. Sometimes I feel uneasy approaching people in this way – it sometimes feels intrusive and one has to deal with some social rejection. People will be super friendly to you as long as they are not going your way, but if they are going your way the response can be cold – you may be ignored and even feel judged. That is a difficult sharp contrast from the angel that eventually decides they’d like to have you on their journey for as far as they can take you. It could be just a short ride, or it could be a long one – each driver bringing you to that new little spot where you will meet another angel who will take you even further. Most miles are good miles in my book, especially if you’ve been waiting a while and so I slowly edged my way toward Harwich so I could take an overnight boat to the Hook of Holland. 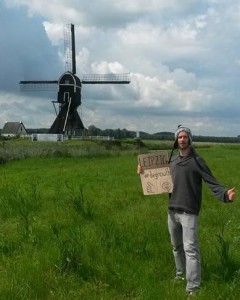 On my second day of hitching I failed, as normal, to get a ride off the boat. Once all the cars had left I had to plod my way to a gas station out of town so I could get on my way. However, a few rides on and after a fair bit of waiting, I was well on my way with one of my rides even stopped on a motorway to take picture of me by an impressive windmill in the Netherlands. Soon I was in Germany but then got stuck at Düsseldorf airport for some hours (and it was raining too). Although I was frustrated a little I soon got on my way again and then later at a gas station in Dortmund I picked up that dream ride that happens once in a while that will take you exactly where you need to go. A 200 km ride to Göttingen right to the doorstep of friend who had couchsurfed with me some months ago in Edinburgh. Life comes full circle and it is in moments like this where I feel that life couldn’t give me much more.

The next day I was hoping to make Leipzig and I thought it wouldn’t take long so I started late. But perhaps overconfident from the previous days it wasn’t as easy as I’d imagined. I circled around Göttingen trying to get a ride onto the A38 toward Leipzig but I just couldn’t get on the right road and I kept going round in circles – too far north, then someone would take me too far south. One guy was about to take me back to a place I’d already been stuck at for 2 hours earlier that day – my German wasn’t good enough to communicate – so I just bailed out as soon as I worked out where he would be dropping me –it wasn’t a good spot but it was good enough and I soon got on my way. When I hitch I like to have a tent with me so that if I don’t get a ride I know I can always pitch up somewhere and try again the next morning. I was starting to think I would have to do this but then that dream ride angel came along – a 200 km plus ride all the way to the south of Leipzig. I made it in three days as I had thought, but it was late so I hopped over a fence in a busy intersection and found a nice little spot in the forest. I slept good and was fully prepared for what turned out to be a very successful degrowth conference.

Hitchhinking has an important role in a degrowth society

I was surprised I didn’t find more people who’d hitched to a conference on degrowth but I did meet one or two and it is always nice to share stories. Hitchhiking is not as popular as it once was– many people have their own cars and there is less trust – but I think hitchhiking has an important role in a degrowth society. It is sometimes a slow way to travel, often frustrating, but also built around simplicity, human connection, trust, and sharing. These are things that seem essential to me for the well-being of the societies within which we live and we need to bring them back – we are all responsible in this process but we can start to build them one step at a time one way or another – all it can take is a hitch.

All in all I my return trip was more than 2500 km and I spent time in 36 different vehicles over 6 days. Many drivers picked me up as their first ever hitchhiker and that felt really positive as so often it is always people who have experienced hitchhiking first hand themselves. It is also surprising how many other hitchhikers you can run into at random gas stations – there are plenty of people doing this and it is great fun. At the end of the days hitching I always look back at the day, and I smile at the adventure I’ve had – which I could never have predicted. Would I have rather taken the train? Not at all!